“Because we have flown, we envy no man on earth.”

Julian Nott was a founder of the modern ballooning movement and one of its most creative and innovative exponents. As of 2017 he had broken 79 World Ballooning Records, and 96 British Records, including exceeding 55,000 feet in a hot air balloon. His records span many classes – hot air, helium, super pressure and combination balloons – and encompass altitude, distance and time aloft. Some of the world records have stood for more than 30 years “The quality of a records can be judged by how long it stands.” Nott was the only person in the world to hold a pressure balloon rating.

Nott stressed that record-breaking is never the central objective. “Most of all I hope to use science to advance and innovate. But setting a world record is indisputable proof of the success of a new design.” Indeed Nott  changed the course of balloon history: for details click here  “INNOVATIVE DESIGN“

A pilot’s pilot, Nott was an Associate Fellow of the elite Society of Experimental Test Pilots, the only person ever elected to The Society for piloting balloons. Additionally, he had the distinction of being a Senior Member of the American Institute of Aeronautics, recognizing engineering experience. The Smithsonian Air and Space Museum has described Nott as “a central figure in the expansion of ballooning, as an organizer, pilot and most of all as arguably the leading figure in applying modern science to manned balloon design.”

During his long and extraordinary career Nott  undertook a number of unique projects. He designed and constructed the first ever hot air balloon with a pressurized cabin, which Nott piloted to a world record altitude and which today is much copied. Other ballooning achievements include the first crossing of the Sahara Desert ; the first crossing of Australia; crossing the Alps; and piloting the world’s first solar balloon across the English Channel. Nott also designed, built and piloted the Nazca Prehistoric Balloon, using only methods and materials available to the Pre-Inca Peruvians a thousand years ago. Nott was the first person to fly a “pumpkin” super pressure balloon. His concept is currently being developed by NASA as the “ULDB” for scientific applications; see “First Crossing of Australia”. Nott holds US Patent 6,182,924 for an entirely new kind of balloon using cryogenic helium see “Design” page.

Nott was a member of the team who designed and built some of the world’s largest blimps and airships, including the US Navy Sentinel 1000 and the Shell Natural Gas Airship. He was a consultant on the design of the Fuji Blimp which flew over the opening ceremonies of the Los Angeles Summer Olympic games.

The importance of Nott’s work has been recognized by inclusion in some of the world’s most prestigious museums, including the Smithsonian Air and Space Museum, where one of his balloon cabins is on permanent exhibition, New York’s Museum of Natural History, NASA’s Johnson Space Center Houston and in the permanent collection of the Royal Air Force Museum, London. See the “Museums” page.

Nott was a senior scientific consultant to both commercial and academic/government agencies including, NASA JPL, The European Space Agency, Google X, and the Loon Project. He contributed to JPL’s efforts to launch balloons for space exploration to Titian and Venus for over 10 years and conceived, designed and built the first Titian flight simulator. In it he flew a model balloon at the lowest temperature a balloon has ever flown, 320 degrees below zero, a temperature assumed to be present on the surface of Titian. Nott was the Senior Balloon Consultant for Alan Eustace’s successful world record altitude sky dive in 2014. He was a consultant on blimps for six Olympic Games, used for security and surveillance. In 2016 he worked on unique, long duration balloons which, being more cost effective, were used at all 4 venues in the Brazil games.

Nott was a scientific observer on two airborne missions led by Peter Jenniskens, senior research scientist at the Carl Sagan Center of the SETI Institute and at NASA Ames Research Center. The entry observing campaigns studied meteor storms and in one case, observed the reentry of the Jules Verne spacecraft after its successful mission to the space station. Nott is a strategic advisor to The Sentinel Mission, a historic space mission Co-founded by Rusty Schweickart, Apollo 9 astronaut and Ed Lu, NASA Astronaut on the International Space Station. Nott is an advisor to World View Enterprises Inc. the near space high attitude balloons, having himself designed the precursor pressurized cabin.

A sought after speaker and writer, Nott, a scientist and a design engineer was the subject of four full-length TV documentaries. He contributed to a wide variety of newspapers and magazines including “The New York Times”, “The Economist” and London’s “Sunday Express” as well as scientific journals including COSPAR’s highly prestigious “Advance in Space Science”, “The Proceedings of The Royal Institution” and US Air Force technical conference papers. His lecturers on Intellectual Courage received rave reviews and provided inspirational examples for those attempting to make a difference in the world, in all walks of life. Nott has advised on all aspects of lighter than air flight for a wide range of non-scientific projects, including commercial advertising, TV and Motion Picture Films.

Educated at Epsom College, Nott held a Master’s Degree in Physical Chemistry from Oxford University. Following graduation, Nott worked in Bangladesh with The British Voluntary Service Overseas, the British equivalent of the Peace Corps. He was an honorary Life Member of the Governing Body of St. John’s College, Oxford, a Senior Member of the American Institute of Aeronautics and Astronautics and Honorary Secretary of the Institute’s Scientific Balloon Systems and Technology Committee, a Fellow of the Explorers Club and founder of the Club’s Technology Committee, a Fellow of the Royal Institute of Navigation and the Royal Geographical Society and a Freeman of the City of London. For twelve years, he was a member of the Council of the Royal Aero Club (Patron H.M. The Queen; President, H.R.H. The Prince Andrew) and has been Chairman, Vice Chairman and Secretary of The British Balloon and Airship Club. Nott serves on several prestigious corporate boards and advisory committees such as Caltech’s Keck Institute for Space Studies and has a specialist appointment to the University of California at Santa Barbara, whose faculty includes five Nobel Prize winners.

Nott was born in Bristol, England, and is a United Kingdom citizen: he also held United States Citizenship. He held a license for all types of balloons with a commercial rating, an instructor’s rating, a super-pressure rating, a night rating; an unrestricted RT license; a parachuting “A” license; and an International (FAI) Sporting License.

Among his many long term commercial project sponsors were Rolex Watches and Moet & Chandon Champagne. Nott appeared in several Rolex advertisements and was the recipient of the Rolex Award for Enterprise, honoring extraordinary individuals who possess the courage and conviction to take on major challenges. 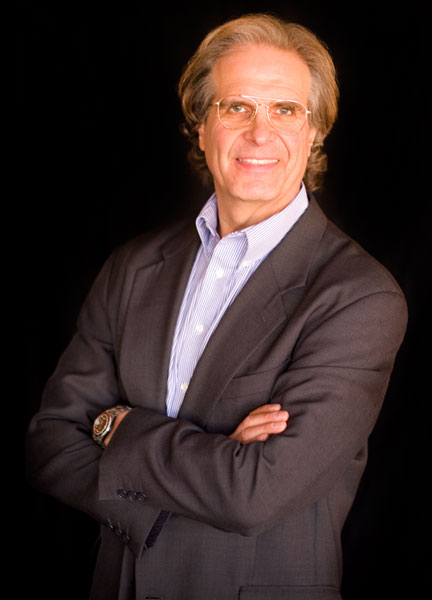 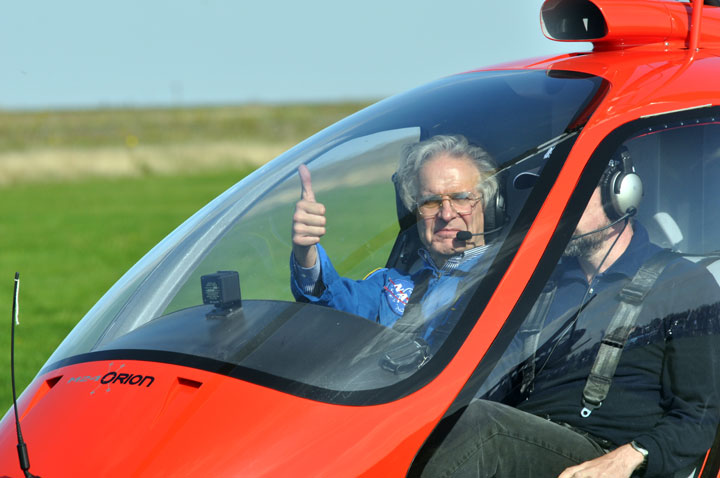 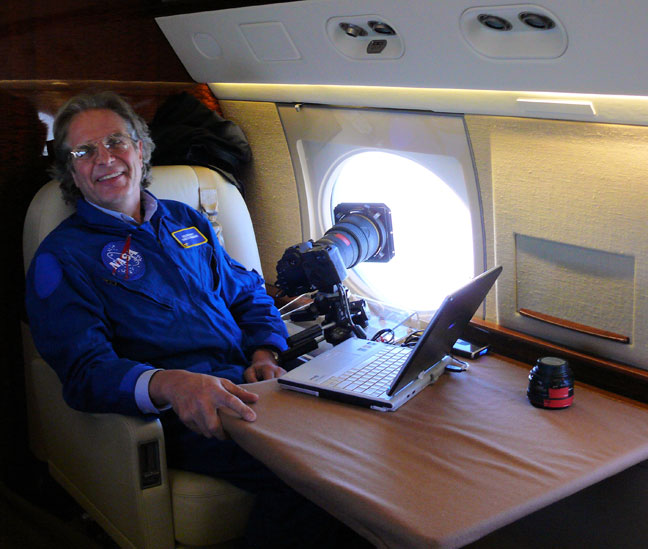 With Burt Rutan in front of SpaceShipOne which captured
the X-Prize for the first private flight into space. 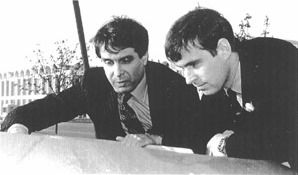 Nott explains the details of one of his unique
pressurized balloon cabins to H.R.H. Prince Andrew.

Nott (upper left) with H.M. Queen Elizabeth, H.R.H. Prince Philip and members of the Council of the Royal Aero Club. 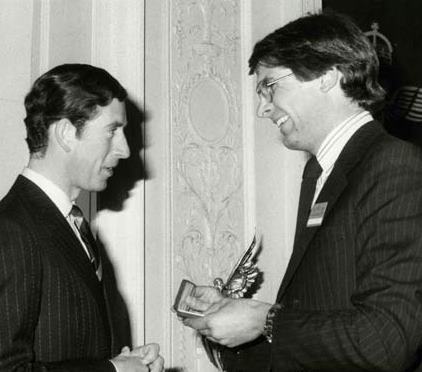 H.R.H. Prince Charles presents Julian Nott with one of the most prestigious international aviation awards, The Gold Medal of Britain’s Royal Aero Club. 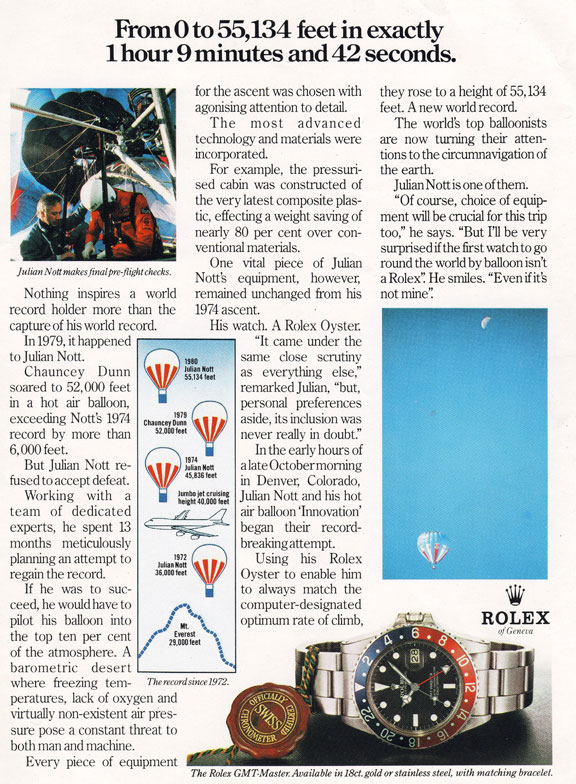